1985,  Live Aid, held at both Wembley Stadium, London (attendance ~72,000) and  JFK Stadium, Philadelphia (attendance ~100,000). The world’s biggest rock stars took part in the worldwide event, raising over £40million. It is estimated over 1.5bn people (about 40% of the world’s population at the time!) in 160 countries tuned in, making it the biggest live broadcast ever known. Artists who appeared included Paul McCartney, Phil Collins, The Who, U2, David Bowie and Mick Jagger, Queen, Tina Turner, The Cars, Neil Young, Tom Petty, Bob Dylan, Bryan Adams, Hall and Oates, Lionel Richie and Led Zeppelin.  Of note, Phil Collins performed in both London and Philly, after catching a Concorde flight to the US after the end of the London show.  Sadly, not Bruce Springsteen, who watched it from his NJ home.  He has been quoted as saying that he regrets not “tossing his guitar in the car and driving on down.”

For more info, check out this History Channel link 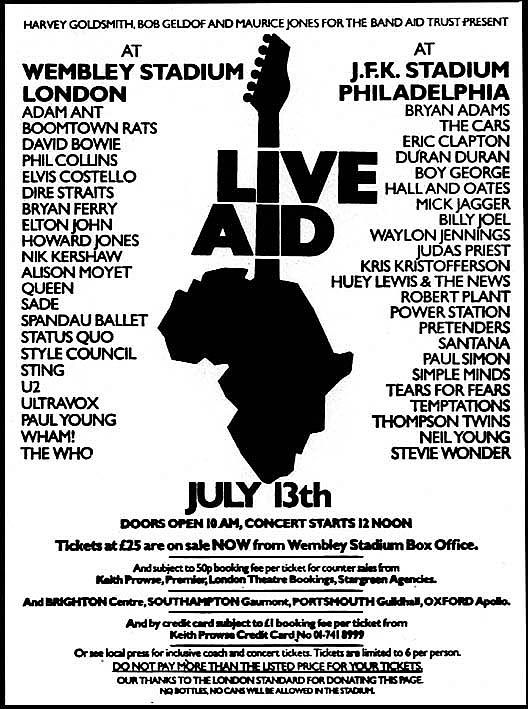 (Note: poster above doesn’t include many artists who showed up to play – Bob Dylan, Madonna, etc.

1996, Over 2,000 guitar players, including Chet Atkins and Jeff “Skunk” Baxter, set a new world record for the largest jam session ever when they played ‘Heartbreak Hotel’ for 75 minutes at Nashville’s Riverfront Park. (From This Day in Music.com)  Reminds me of the massive jam session that an Italian town did in 2015 to Foo Fighers Learn To Fly to beg them to play their town- and of course it worked!  Since I can’t find any video of the 1996 Heartbreak Hotel jam session, this will have to do (plus its one of the coolest things ever – it still gives me goosebumps and brings a tear to my eye its so awesome)