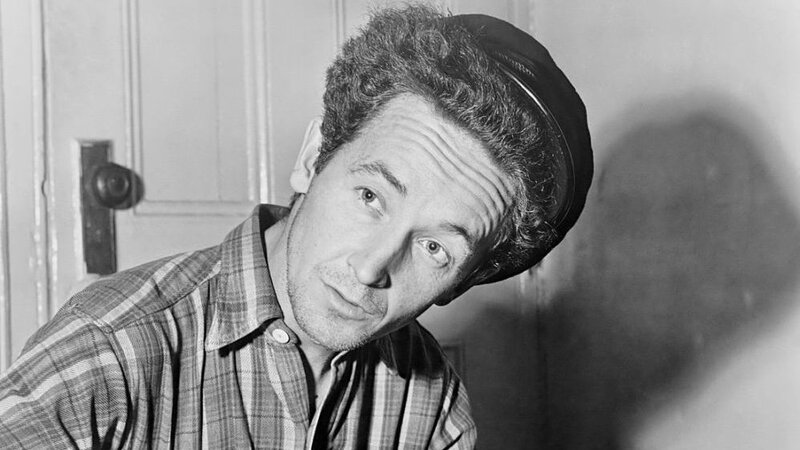 Courtesy of the Library of Congress

Some have called “This Land Is Your Land” an alternative national anthem. Others say it’s a Marxist response to “God Bless America.” It was written and first sung by Woody Guthrie. Over time, it’s been sung by everyone from Bruce Springsteen to the Mormon Tabernacle Choir. Folklorist Nick Spitzer has the story of an American classic.

Woodrow Wilson Guthrie was born in 1912 in Okemah, Okla. He recorded “This Land Is Your Land” during a marathon April 1944 session in New York for Moses Asch, who founded Folkways Records. Guthrie was on shore leave from the Merchant Marines, one of his many occupations during the Depression and war years.

Growing up in small-town Oklahoma, Guthrie heard church hymns, outlaw ballads, blues, fiddle tunes and popular music. The Guthries had been fairly prosperous — Woody’s father was a small-time politician and businessman — but the family unraveled in the topsy-turvy oil economy of the ’20s and ’30s. The Guthrie family relocated to Pampa, Tex., after Woody’s mother was committed to a mental institution for a mysterious nervous condition. That’s when Woody took to the road.

As a boy, he’d already proven himself to be a gifted street entertainer — dancing, playing guitar and harmonica, making up songs as he went. Words and music became a growing passion for him.

“This Land Is Your Land” wasn’t released by Folkways until 1951, but the song was originally written in February 1940, when Woody Guthrie first arrived in New York City from Oklahoma. Guthrie had a keen ear for the recordings of Virginia’s Carter Family, and he was not afraid to borrow. A 1930 gospel recording, “When the World’s on Fire,” sung by the Carters, must have provided the tune for what would become “This Land Is Your Land.”

Musician, activist and Guthrie’s fellow traveler Pete Seeger has probably sung “This Land” more than anyone else. He says that Guthrie made good use of the popular melodies of the day.

“He tended to write words first, and later on picked out a tune,” Seeger says. “Woody once said, ‘When I’m writing a song and I get the words, I look around for some tune that has proved its popularity with the people.'”

A man happier on the road than at home, he’d walked, hitched and ridden the rails all over the country. He went first to the Gulf Coast, then west to California, where he joined the half-million so-called Okies and Arkies — Dust Bowl refugees migrating in search of better lives. Although Guthrie purposefully threw himself into these travels partly to escape family troubles and his disintegrating first marriage, what he saw and experienced as he cris-crossed the country contributed to his emergence as a social commentator.

He was irritated by Irving Berlin’s “God Bless America,” sung by Kate Smith, which seemed to be endlessly playing on the radio in the late 1930s. So irritated, in fact, that he wrote this song as a retort, at first sarcastically calling it “God Blessed America for Me” before renaming it “This Land Is Your Land.” Guthrie’s original words to the song included this verse:

There was a big high wall there that tried to stop me.
The sign was painted, said ‘Private Property.’
But on the backside, it didn’t say nothing.
This land was made for you and me.

This verse was recorded by Moses Asch in 1944, but not released. In fact, Guthrie’s recorded version was more or less lost until Smithsonian archivist Jeff Place heard the acetate master during a 1997 transfer of the recording to a digital format. Still, it was sung at rallies, around campfires and in progressive schools. It was these populist lyrics that had appealed to the political Left in America.

Guthrie’s folk-singing son, Arlo Guthrie, and Pete Seeger have both made a point of singing the more radical verses to “This Land Is Your Land,” also reviving another verse that Guthrie wrote but never officially recorded. This verse was scribbled on a sheet of loose-leaf paper now in the possession of daughter Nora’s Woody Guthrie Archives.

One bright sunny morning in the shadow of the steeple,
by the relief office I saw my people.
As they stood hungry,
I stood there wondering if God blessed America for me.

Nora Guthrie says she has an idea why these words may not have been recorded at the 1944 session — and why the ‘private property’ verse that was recorded was not issued. “This is the early ’50s, and [U.S. Sen. Joseph] McCarthy’s out there, and it was considered dangerous in many ways to record this kind of material,” she says.

“If my dad had done the recording, I don’t think it would have meant anything to him if he was imprisoned, actually,” she says. “He was quite used to living without and having nights in prison and things like that. Like most of the things, if we’re talking about my dad, it gets very complex here. So I think, you know, The Weavers originally just recorded the first three verses — which, in one way, was very, very helpful to my dad, because we had no money. So thank God that they recorded something, and our family was able to get some royalties from that.”

Later in his life, Guthrie lost his ability to play guitar and sing, but he continued to write and inspire a younger generation of performers. Bob Dylan and Ramblin’ Jack Elliott, Bruce Springsteen, Billy Bragg and the band Wilco — these are just some of the musicians who have followed in the footsteps of Woody Guthrie. When Guthrie recorded “This Land Is Your Land,” he ended with this verse:

When the sun comes shining, then I was strolling,
With the wheat fields waving, the dust clouds rolling,
The voice come a-chanting, and the fog was lifting.
This land was made for you and me.